Be ready for your state’s mandate.

Massachusetts
Massachusetts has taken a previously written bill and modified it to new standards in regards to mandating E-Prescribing of Controlled Substances. The changes included exceptions and waivers for providers. The bill requires EPCS as well as other requirements to address opioid addiction. The bills go into effect two years after they are passed, January 1st, 2020.
Minnesota
Minnesota was the first state to mandate e-Prescribing on January 1, 2011. Since then there has been a steady incline of e-Prescriptions in the state, but since there is no enforcement of this mandate, paper prescriptions are still used. Drug overdose deaths in Minnesota increased 11% from 2014 to 2015, proving that there is work to be done. EPCS should be used to improve these numbers.
Nevada
Nevada Assembly Bill 310 proposes mandating that all prescriptions be prescribed electronically. The bill outlines additional regulations for controlled substance prescriptions. Effective date 01/01/2020
New Jersey
New Jersey Providers have already been exposed to New York’s strict EPCS mandate, so the government has drafted a bill that also requires all medications, non-controlled and controlled (CII-CV) substances, must be electronically prescribed. The bill also requires EHR vendors to allow EPCS for CII’s. There is no official mandate date, but it will be set for one year after the bills are passed.
New York
New York mandated e-Prescribing of all controlled and non-controlled substances on March 27th, 2016. Since the mandate, thousands of New York prescribers have adopted and e-Prescribing solution.
North Carolina
North Carolina government has drafted the STOP (Strengthen Opioid Misuse Prevention) Act requiring e-Prescribing for CII-CV medications. The state has listed the potential exceptions to the law.
Effective date 01/01/2020
Ohio
Beginning in August 2017, Ohio began implementing new requirements for providers when writing prescriptions and are continuously enacting legislation over the next few years. The newest addition, which went into effect on December 29, 2017, required providers to include the first four characters of the ICD-10 diagnosis code or full procedure code on all opioid prescriptions. The law for all other controlled substances goes into effect on June 1, 2018.
Oklahoma
Out of 14,000 prescribers in Oklahoma, only 8% are utilizing e-Prescribing. Law enforcement believes that e-Prescribing will make it easier for doctors to prescribe and renew controlled medications for their patients in smaller dosages – reducing the need for prescribing large amounts. State senators are interested in the bill and additional legislation to help decrease opioid abuse in 2018.
Pennsylvania
Senator Alloway has introduced legislation on February 6, 2017, that will require controlled substances to be electronically prescribed. If this bill passes, paper prescriptions for opioids will no longer be accepted. Alloway hopes that this bill will make doctor shopping and prescription forging tough. This bill will go into effect one year after enactment.
Rhode Island
Effective January 1st, 2020, Rhode Island’s bill takes effect mandating e-Prescribing of controlled substances. There are no existing exceptions or waivers in place yet.

Electronic Prescribing from your software

E-Prescribing is a prescriber's ability to electronically send an accurate, error-free and understandable prescription directly to a pharmacy from the point-of-care - is an important element in improving the quality of patient care. The inclusion of electronic prescribing in the Medicare Modernization Act (MMA) of 2003 gave momentum to the movement, and the July 2006 Institute of Medicine report on the role of e-prescribing in reducing medication errors received widespread publicity, helping to build awareness of e-prescribing's role in enhancing patient safety.  Adopting the standards to facilitate e-prescribing is one of the key action items in the governments plan to expedite the adoption of electronic medical records and build a national electronic health information infrastructure in the United States. 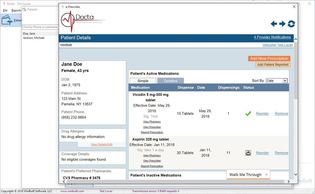 In the last 2 years, Docta has become the single most trusted e-Prescribing solution in the market by partnering with DoseSpot to provide state-of-the-art security, functionality and stability throughout the e-Prescribing process.

By simply clicking the Add Prescription button in the patient's consultation window, all e-Prescribed medications are saved in the patient's record so you can keep track of them and review their history accurately.